Deprecated function: The each() function is deprecated. This message will be suppressed on further calls in menu_set_active_trail() (line 2405 of /home/adjumanigo/public_html/includes/menu.inc). 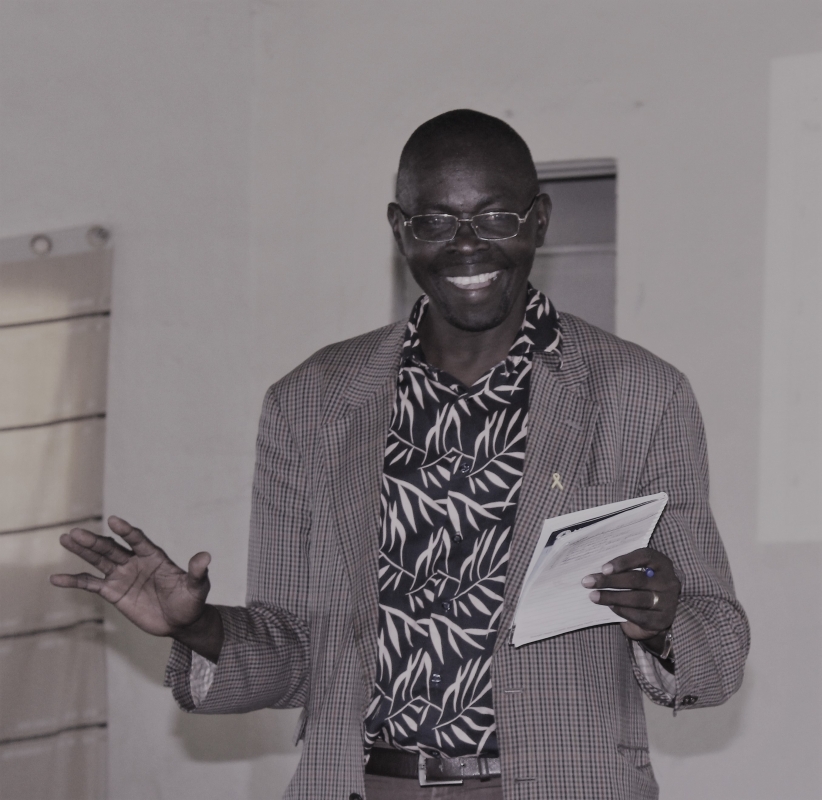 Knowledgeable! Ambitious! Hardworking! are arguably the first things that will impress anyone about Dr. Bhoka George, the District Health Officer. I walk into his office and he stands up to usher me in, we exchange pleasantries and sit down almost in unison. His respect for others is quite admirable. It is no doubt that a quick survey had nominated him as a role model figure not just at his department but at the institutional level too.

I am not surprised later when he tells me that he has barely half a year to leave the office to join politics; a task he has deferred since 2001. He quickly runs through his long list of achievements spanning from serving in Arua and Moyo hospitals to AMREF, USAID, and UNICEF. It is evident that he has been a leader for a larger part of his 51 years right from his school days including once studying in a seminary.

Currently, he serves as a board chairman for Action for Development and a member of the National Steering Committee of the Health sector integrated refugees response plan of the Ministry of Health. As he hands me a copy of the response plan, I can’t help but wonder how and if these achievements are of any value to the District.

Among numerous achievements he has accomplished in the last 3 years, Dr. Bhoka is passionate about having provided stewardship to the health department that saw it emerge the 1st from the 75th position. He is also proud of the various awards and rewards the departments has received especially in the management of Tuberculosis. He, however, expresses disappointment that the department dropped in performance because of the delay to harmonize the correct number of refugees. He attributes the achievements to the continuous mentorship of his staff, the belief in a common vision, the numerous implementing partners, prioritizing accountability and the cohesion between the political and technical leadership of the district.

These achievements haven’t however been a bed of roses. The beginning of this beautiful journey as he looks back was quite challenging. At the time he was appointed, for example, he had to serve as both a Medical Superintendent of the Hospital and District Health Officer for some time as the recruiting authorities looked for a replacement for the former position. But that was not all, he also had an uphill task of ensuring that the people he hoped to lead had the right mindset. He explains that some people had spent many more years and therefore didn’t welcome the idea of having to do things in quite a different way. He cites an example of how hard it was to convince implementing partners to come to the district for meetings instead of a long tradition he had found in place where district officials would go and attend meeting at premises of partners.

While he appreciates the fact that partners have been a great blessing to the district in many ways, the district still remains in control of anything within its mandate and that includes playing a patronage role whenever it is required. He says he is happy that partners are beginning to appreciate the capacity of the local government to deliver and manage services. A realization he believes comes handy with a looming influx of refugees.

He also expressed his discomfort working with people who cared more about their personal survival than the benefit of all. This he observes undermines the beauty of service delivery and public service. One other challenge he also admits he has struggled to avert is the poor customer care at the hospital by some staff. I ask him if he is not concerned that these achievements may go to the dogs after he leaves. Dr says he is trying his best to find a successor to mentor but he has also not fully made up his mind to leave the office. He reveals that a few observers especially family members are advising him to pursue a career path to the Ministry of Health instead of tussling it out for the Obongi MP seat with his cousin.

As he deliberates on the best step to take, the MP hopeful says he feels district representatives shouldn’t just be participants in parliament but influencers of national policies and advocates of lobbying. In fact, he says he would be delighted to see a district council with mainly graduates. I don’t know for sure how viable that is but I agree with his favorite quote that states that success comes from hard work and determination.